In 2019, when recycling in the United States was beset by problems

The section of the article focusing on sorting highlighted the innovations of AMP Robotics, a Colorado-based company whose developments in artificial intelligence (AI) and machine learning has, Fast Company observed, allowed materials recovery facilities (MRFs) to increase the accuracy, and lower the costs, of sorting recyclables.

“Our vision is to continue to innovate with the AI so it can be used to operate an entire recycling facility optimizing for highly pure commodities at high efficiency to drive down costs,” Matanya Horowitz, founder and CEO of AMP Robotics, told Fast Company. “The 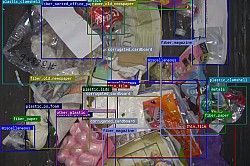 opportunity is to create something that is much more like an automated manufacturing facility. We see this as the path to making recycling more economically sustainable.”

AMP Robotics recently joined the roster of NERC’s Advisory Members, bringing to the table a voice for technological breakthroughs in recycling. Earlier this year, the company announced the pilot of a Denver-based automated facility design for advanced secondary sortation of recyclables. “Results we’ve observed at our test facility are promising and represent an infrastructure solution that can increase recycling rates, divert recyclables from the landfill, meet the growing demand for recycled content, and protect our environment,” Horowitz said.

“Joining NERC has allowed us to broaden our outreach and relationships to directly engage with critical policy and decision makers in the region,” observed Carling Spelhaug, Marketing Communications Manager.

Recently, AMP Robotics partnered with Greenbridge to deploy six AI-guided robotic sorting systems at the latter’s Ohio-based Evergreen subsidiary, one of the nation’s largest recyclers of PET bottles. According to a press release, AMP’s technology identifies and sorts green and clear PET from post-consumer bales of plastic soft drink bottles, which Evergreen recycles into reusable flakes or pellets (rPET) and sells to end markets as feedstock for new containers and packaging.

Continuing on its innovative trajectory, AMP also recently introduced an AI-powered material characterization software solution that enables the recognition and classification of recyclables that flow through different recovery stages of the recycling process. This solution serves as a breakthrough in the effort toward providing measurable transparency on the recyclables captured and missed during different recycling processes, as well as confirming the composition of recovered material bales destined for resale to end markets in the supply chain.

AMP Robotics’ pioneering technology has not gone unnoticed. Cleantech Group, an influential consultant, included AMP Robotics in its 2021 Global Cleantech 100, noting “the uptick in automation and robotics-enabled solutions” in recycling. And in April, Fast Company named AMP’s AI platform a finalist in its World Changing Ideas Awards program. This accolade followed Fast Company’s 2020 recognition of AMP as one of the Most Innovative Robotics Companies, stating that the company uses “machine-learning algorithms to show its software millions of images of the items that its robots might come across as they separate recyclables from landfill.”

With numerous accolades and financial support, AMP Robotics seems prepared to build upon its early success to provide extensive solutions to the sorting challenges faced by MRFs. NERC looks forward to a productive relationship.