Headquartered in Phoenix, Arizona, Republic Services is the second-largest

recycling and waste management company in the United States, with 14 million customers and revenues of over $10 billion in 2017. The company operates 195 landfills, 204 transfer stations, 343 hauling facilities, and 90 recycling centers. 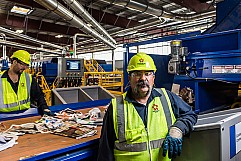 “With its expansion in the Northeast, Republic made a commitment to remaining involved with recycling organizations and policies, and decided to become a member of NERC,” said Frank Chimera, Senior Manager. “We are looking forward to the opportunity for regional conversations and collaboration that NERC offers.”

“I am pleased to report we have achieved all of our time-bound goals,” Slager wrote in his introduction to the report. Republic’s safety performance, for example, is 41% better than the waste management industry average, the report states.

“At Republic, we understand that we play a critical role in helping more than 14

Given the growing nationwide emphasis on the responsible collection of food scraps and other organics, it is not surprising to learn of Republic’s involvement. The company collects and diverts 500,000 tons of organics per year. The company’s Pacific Region Compost facility was recognized with SWANA’s Excellence Award in Composting Systems, and received the Oregon Recycling Association’s Recycler of the Year Award.

Republic’s sustainability efforts have earned the company recognition from major international organizations. It was ranked among leading companies by CDP for its progress in reducing the impacts of climate change. It is the only recycling and waste management company currently included in Barron’s 100 Most Sustainable Companies. Republic was one of only eight North American companies to receive a Gold Class Award in RobecoSAM’s 2018 Gold Class Sustainability Yearbook. And it is the only waste management company currently listed on both the World and North America indices of the Dow Jones Sustainability Index.

Additionally, the Human Rights Campaign Foundation’s 2018 Corporate Equality Index gave Republic a 100% rating as “Best Places to Work for LGBTQ Equality”. The company has also been included among Ethisphere’s list of the World’s Most Ethical Companies.