Pay as you throw…the debate goes on and on…

Throughout my career in solid waste management, people’s personal waste management habits have continued to confound me. Why do people litter? Why at the end of a movie or concert is it okay to throw your beverage and food containers on the ground? Why do we continue to have a relatively low rate of recycling in this country? And, then there are people’s objections to “pay as you throw”.

Being responsible for one’s waste, sorting it, and certainly paying for its disposal, has always seemed to be a no brainer to me. Of course we should all pay for our trash generation, just like any other utility or service. Right?! I pay for my electricity use, sewer usage, heating oil, etc. Why should my property taxes pay for other people’s waste disposal?  Paying for waste disposal out of the tax base or even through a flat rate system means that generators do not know their actual costs for disposal and usually pay little attention to the quantity of waste produced. There’s no economic incentive to recycle or compost. No incentive to reduce or reuse.

Yet, the arguments against PAYT continue to be waged around the country. Few would even contemplate paying for everyone’s electricity use out of property taxes or even paying a flat rate for “all you can use” electricity. However, trash is somehow sacred ground that should continue to be “free” or a single “all you can dispose of” rate.

As I am sure most of you know, under pay as you throw, also known as unit pricing or variable-rate pricing, trash metering, or user-pay, residents are charged for trash disposal based on the amount they throw away. Typical in commercial waste management, it is not even a common waste management practice in most states. Only one state mandates that communities implement pay as you throw (although under Vermont’s new Universal Recycling Law it will become mandatory); and few states have more than 50% of their communities with an implemented PAYT program. 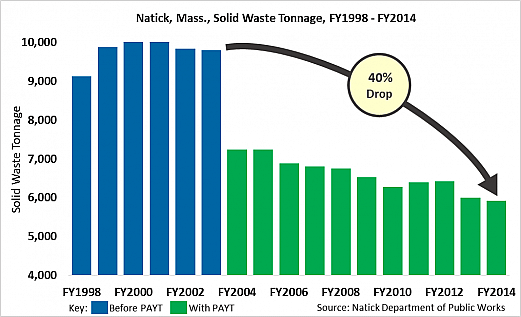 According to the Econservation Institute, PAYT has been shown to be the “most effective” way to increase recycling, leading to increases in recycling by 50% or more. Their research indicates that PAYT:

Implementing pay as you throw can be done in a variety of ways to best meet the needs of a community and its residents. Waste can be measured by weight or volume. Volume-based models use a range of “units” for identifying how charges will be levied-- bags, tags, containers or even RFID (radio-frequency identification). Programs also vary as to the extent of charges levied: in “full-unit pricing,” users pay for all the garbage they dispose of; “partial-unit pricing” allows residents to dispose of a set base amount at no charge (paid for through general fund taxes)—say, one bag or one container, with additional bags or containers paid for by the resident; and, in a “variable-rate pricing” scheme, residents can choose to rent a container of varying sizes, with the price corresponding to the volume of the container (smaller containers priced at the lowest amount). 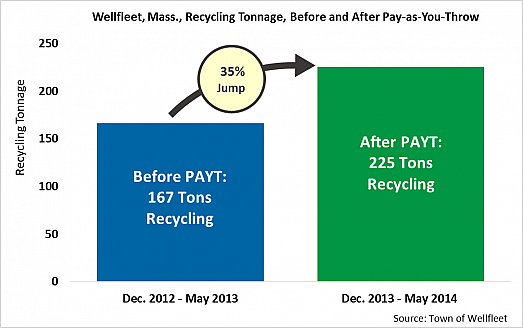 Part 2 of “Pay as you throw…the debate goes on and on…” will appear next week.