Collecting Textiles – Make it Work for Your Community, Part 1

Collecting used textiles is a strategy that more and more communities are using to decrease the volume of their trash and save money on disposal fees.   According to the U.S.EPA, every person in the country generates approximately 82 pounds of textiles per year.[1]  In the same EPA report, they estimate that only 15% of the textiles generated nationwide get collected for reuse or recycling.  This means that 85% of used textiles are reaching the landfills and incinerators; which costs each of us money.

Figure out how much your community is paying to throw away textiles.  Just plug in your community’s numbers in place of the XXs in Table 1.

When you know the cost to your own community, it is shocking.  For example, one Vermont town -- 10,000 people and $96/ton trash tipping fee —spends approximately $33,456/year to dispose of used textiles!!!

There is an alternative to disposal that we all can benefit from.  The U.S. has a robust infrastructure to collect, distribute, and recycle these materials.

Box Collection System - I’m sure you’ve seen the large metal collection boxes on the side of the road that say something like “Drop Used Clothes Here.” This type of textiles collection has been used for many years and is dependent upon individuals dropping off their filled bags on the way to work or when running errands. The boxes have commonly been owned and managed by charitable organizations.  Due to the growing volume of used textiles in this country, the markets have grown accordingly and for-profit companies are now also collecting textiles in roadside boxes.

Secondhand Stores –The large secondhand stores are still run by charitable organizations.  Most of which use a dual approach for collecting the textiles—roadside bins and drop offs directly at their stores. 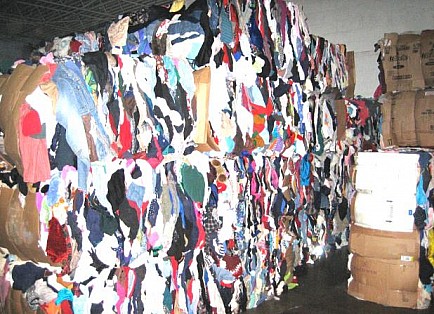 According to the Council for Textile Recycling[4] (CTR) and the Secondary Materials & Recycling Textiles Association (SMART),[5] 45% of the collected textiles in the U.S. are sold and reused as secondhand apparel, 30% become wiping and polishing cloths, 20% are reprocessed into fiber, and 5% are unusable. Of the collected used clothing, only 2 – 4% is sold in this country and the rest is sold overseas by both charitable organizations and businesses.

The growth of the overseas markets for used clothing has developed over the last twenty-five years.   Many developing countries have established infrastructures for repairing, modifying, and selling used clothing from the States.  The people of these countries greatly depend on the used clothing markets for supporting jobs and providing a cheaper alternative for buying quality clothing. According to Eric Stubin, President of CTR and CEO of Trans-Americas, his company “currently ships to more than 45 countries on six continents.” And “approximately 60% of the exported used clothing they wholesale is sold to Africa.”

Unlike the used clothing markets, the recycling markets for wiping cloths and fiber are primarily based in the U.S.

Today’s definition of textiles has dramatically changed from the one used years ago.  It now includes new, old, stained, ripped, or torn clothing and leather products, shoes, belts, beddings, draperies and slipcovers, and stuffed animals.  See Table 2 for examples of acceptable textiles.

The collection of textiles for reuse and recycling is becoming a popular topic of discussion and action in the Northeast states.  Following are some recent activities:

Northeast Region – In April 2013, the Northeast Recycling Council, Inc. (NERC), a non-profit organization working with the ten Northeast states, held a day-long intensive workshop on the recovery of textiles.

Massachusetts–  The Massachusetts Department of Environmental Protection (MassDEP) has completed a waste characterization study that identified textiles as 4.9% of the total solid waste generated, held a workshop with SMART and the MassDEP staff, held a state-wide textiles summit to educate communities, created a statewide outreach initiative, held regional workshops with municipal recycling coordinators, issued a joint press release with SMART, and are providing outreach tools and templates to municipal coordinators.  For more information on Massachusetts’ textiles recovery initiatives, contact Brooke Nash, of MADEP or visit their new Textile Recycling website.

Connecticut- In the Waste 2010 Characterization Study completed by the Connecticut Department of Energy and Environmental Protection (DEEP), the State identified textiles making up 4.1% of the municipal solid waste stream.  In addition, DEEP requested NERC to hold its April 2013 Textiles Recovery Workshop in Connecticut and facilitated the Workshop. The CTDEEP will also be addressing textile recycling at their June 25th SWAC meeting in Hartford.  For more information about the meeting, contact Chris Nelson of CTDEEP, or visit their website.

New Hampshire – The New Hampshire Department of Environmental Services sponsored a training on textiles recovery management for recycling facility managers on August 7, 2013. The training was organized by NERC with presenters from SMART.