To view our archived Bulletins, click on a date below.

To join the EMail Bulletin list...
Send an email to Lynn Rubinstein making the request. Please be sure to include your full name and organization.

To leave this list…
You may remove your name from this list at any time by sending an email to this address: list_server@nerc.org (please note that there is an underscore '_' between the words 'list' and 'server')

In the subject line of the message, enter: Unsubscribe bulletin@nerc.org, emailaddress (where 'emailaddress' is the address you'd like to unsubscribe).

Mary Ann Remolador Honored for 12 Years of Service to NERC

the NERC Board of Directors meeting in October, Mary Ann Remolador, Assistant Director of NERC, was recognized for 12 years of dedicated, outstanding service. Brenda Grober, President of the Board, made the presentation and spoke on behalf of NERC in honoring Mary Ann. 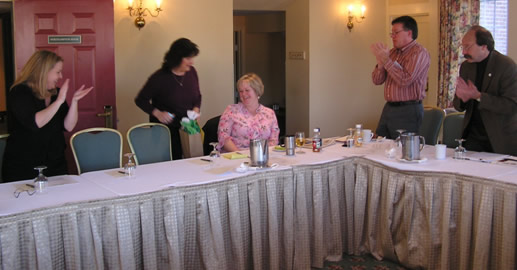 "Mary Ann has been the Assistant Director of NERC since 2003. During her tenure with NERC, Mary Ann has been responsible for so many of the great programs that we all use and refer people to

During her 12 years with NERC, Mary Ann has become an expert at providing technical assistance to expand recycling and accomplish recycling business development. Some of the key areas that she's worked on have include:

No matter what she has been involved with, she has always been available to us. I consider her my friend and an excellent person to bounce ideas off of.

On behalf of all of us,
We love you,
We admire you,
And we so greatly appreciate you.

Congratulations on this very special anniversary.

The PowerPoint presentations from NERC's Fall Conference are now available on the "Members Only" section of NERC's website. If you are not a NERC member, but attended the conference and want a copy of a presentation, please contact Mary Ann Remolador, NERC's Conference Organizer.

As you may recall, in March 2005, NERC members engaged in a facilitated session to agree on a message/slogan that the ten Northeast states could all use to communicate the importance of recycling. We assumed that each state's approach to using the slogan would be different and dependent on individual budgets. The slogan that received the most votes on that day is

Recycle - It really does matter!

A Committee of NERC Board members was convened to further refine the slogan (added the bullets below the slogan, which states may or may not decide to use with the first line) and to develop a plan for market testing it before suggesting NERC member states use it. The Committee also identified potential uses for the slogan including as a byline on all emails sent by the state's environmental agency, as a topic for press releases, on departmental recycling brochures (with or without art work), and to be incorporated into public presentations. The target audiences for the slogan were also identified as the public, legislators, local decision-makers, educators, and more.

In addition to organizing the Committee, NERC staff identified two colleges that may be willing to conduct test marketing of the slogan - Bryant University and Connecticut College. (Thanks to Peggy Harlow of the Massachusetts Department of Environmental Protection for approaching her alma mater, Connecticut College, with this request.) We should know in late winter if either of the colleges will be able to assist with the research.

Another very successful informational conference call about how to procure green electronics using the Electronic Product Environmental Assessment Tool (EPEAT) was held on November 2 - with more than 100 people participating from around the country.

NERC has grants from EPA Regions 1 and 3 to promote the use of EPEAT by large purchasers such as government agencies, institutions, and large companies. EPA Region 10 generously sponsored the conference call.

A discussion on how haulers and NERC state members can work together to increase recycling in the region was held on October 26 in Northampton, Massachusetts. NERC would like to thank Bestway Disposal Services, Casella Waste Systems, EL Harvey & Sons, and Waste Management for their willingness to participate in this discussion. NERC would also like to thank the for their assistance in planning and facilitating the discussion. The meeting was very productive and we are looking forward to future collaborative efforts.

Now in its eighth year, Maine Recycles Week kicked off on November 8 and ran for eight days, culminating with America Recycles Day on November 15. Communities throughout the state hosted activities in schools, businesses, and homes to help spread the word about the importance of recycling. Some of the activities that included: the official opening of the Sandy River Recycling Association's food waste composting operation in Farmington; the Camden Rockport "Fashion Show," which will be revived at the Samoset Resort in Rockport; and an open house at Ruth's Reusable Resources Center in Saco. In addition, schools participated in recycling program competitions and the eagerly anticipated poster contest. The goal of this year's Maine Recycles Week was to encourage increased recycling by residents and businesses, helping push the statewide recycling rate closer to its 50% goal, while refocusing our attention on sustainable efforts.

New York State's Governor, George E. Pataki, recently signed into law new requirements for automobile manufacturers, importers, and distributors. Chapter 611, Laws of 2006, (effective January 1, 2007), requires the phase out of mercury-added components from motor vehicles sold in New York State. Model Year 2012 motor vehicles sold in calendar year 2011 will be the first vehicles required to be mercury-added component free. The law states, "Mercury-added component means a motor vehicle component that contains greater than fifteen milligrams of mercury, which was intentionally added to such vehicle in order to provide a specific characteristic, appearance or quality, to perform a specific function, or for any other purpose. Such components shall include, but not be limited to, switches, sensors, lights and navigational systems."

If a motor vehicle contains a mercury-added component that is necessary to comply with federal or state safety or health requirements, or for national security, the manufacturer may apply for an exemption. If an exemption is granted by the Department of Environmental Conservation, the motor vehicle with the mercury-added component must be labeled by the manufacturer. The law also requires that state agencies give a preference to purchasing mercury-free motor vehicles taking into consideration competition, price, availability and performance.

The Pennsylvania Recycling Markets Center, located at Penn State Harrisburg in Middletown, PA, is a non-profit organization supported with funding from the Pennsylvania Department of Environmental Protection.