A Composter’s Guide to Project Drawdown

Today's guest blog was written by Angelina Peone, the Recycling Coordinator at Ulster County Resource Recovery Agency in Kingston New York. It originally appeared in the US Composting Council's Soil Builders Blog, and can be found here.

In 2017, a nonprofit organization of leading scientists and researchers called Project Drawdown published a comprehensive report of key climate solutions and options to achieve ‘drawdown’ – the future point in time when levels of greenhouse gases in the atmosphere stop climbing, and start to steadily decline. The organization published an update on their initial assessments in the 2020 Drawdown Review, a 91-page report that ranks the critical actions needed to curb global warming temperatures under 2˚C – which is widely regarded as the scientific consensus of a global warming tipping point where climate change impacts could devastate the planet. The researchers lay out two ambitions scenarios that could achieve their emission reduction goals by mid-century if all solutions are applied globally. Among the list of key climate solutions: bioplastics and composting.

The authors list Composting as a solution to Use Waste, noting that “composting can range from backyard bins to industrial-scale operations. Regardless, it converts organic waste into soil carbon, averting landfill methane emissions in the process” (35). (29). The authors list Bioplastics as a climate solution to improve materials, stating that “most plastics are made from fossil fuels, but bioplastics utilize plants as an alternative source of carbon. They often have lower emissions and sometimes biodegrade” (34).

Project Drawdown developed two scenarios to assess the impact of global efforts to implement all 100 solutions where solutions are ranked based on the projected emissions reduction. With regard to the relative differences in ranking among scenarios, the authors assert that “the relative importance of a given solution can differ significantly depending on context and particular ecological, economic, political, or social conditions…[The scenarios] vary significantly in terms of when we might reach Drawdown, how high atmospheric concentrations of greenhouse gases might rise before then, and what the implications for Earth’s climate might be.” Scenario 1 achieves Drawdown by the mid-2060s. In Scenario 1, Composting ranks in at #57 and Bioplastics ranks in at #69. Scenario 2 is a bolder, more ambitious approach, and reaches the point of Drawdown by the mid-2040s In Scenario 2, composting trails slightly behind as solution #62, and bioplastics rank in as solution #57. 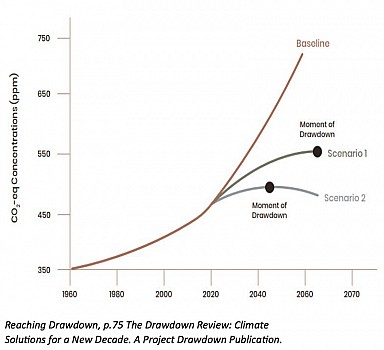 Beyond these examples, organics recovery is inherently linked to several other solutions proposed by the researchers. Compost use is directly discussed as part of the Regenerative Annual Cropping solution. The authors assert that “building on conservation agriculture, regenerative annual cropping can include compost application and green manure [which can] reduce emissions, increase soil organic matter, and sequester carbon.” Furthermore, it can be argued that compost use, and its many horticultural benefits, clearly plays an indirect role in several of the other necessary Shifts in Agricultural Practices solutions – such as Conservation Agriculture, Farm Irrigation Efficiency, Nutrient Management, and Improved Crop Production. Methane digesters are noted as key solutions to a global Shift in Energy Production and in the Use Waste solutions. “Industrial-scale anaerobic digesters control decomposition of organic waste and convert methane emissions into biogas, an alternative fuel, and digestate, a nutrient-rich fertilizer” (23, 35). Perhaps most notably, reducing wasted food emerged as one of the top, most-impactful climate solutions proposed by the project, noting that “roughly a third of the world’s food is never eaten, which means land and resources used and greenhouse gases emitted in producing it were unnecessary. Interventions can reduce loss and waste, as food moves from farm to fork, thereby reducing overall demand” (28).

Through the process of reviewing the report and its findings, it’s clear that society can realistically reach a significant reduction in emissions using the tools and systems that are already available, and the full scope of compost applications for climate mitigation is becoming increasingly realized by the scientific community. Credible research continues to emerge with findings that validate compost’s role in slowing the pollution that causes global climate change. The Marin Carbon Project studied compost’s effects on soil carbon sequestration in the grasslands of California. In an article by the University of California, From Waste to Wonder: Using Compost to Restore Carbon to Soil, Nicole Block explains, “Soil carbon sequestration is the process of capturing carbon dioxide from the air [by] plant photosynthesis. This process provides nutrients for the soil while reducing the amount of carbon dioxide in the atmosphere. When compost is added to soil, it contributes to this process.” And a 2019 University of California-Davis study found using chicken manure compost alongside cover crops could increase soil carbon by 12.6%.

The use of compost enables stewardship of local natural resources by improving soil quality, reducing agricultural water use, pesticide use, and chemical fertilizer use, among other benefits such as improved crop yields, and increasing soil carbon and organic matter. Community-scale public or private composting programs at every organizational size, scale, and capacity play a critical role in achieving the local and global environmental, economic, and social benefits that composting has to offer. Composters across the nation should leverage the findings of Project Drawdown to engage with the increasing community awareness of these innovative climate smart solutions.