Recycling can save the planet. We can do it together.

This guest blog is courtesy of The Recycling Partnership and Upworthy, and was originally published on Upworthy's website. The blog was written by Mark Shrayber.

If you live in a major metropolitan area, you've probably complained about the fact that "garbage night" means that you're going to have to spend at least five minutes of walking downstairs, pulling your trash, compost, and recycling bins on the curb, and then debating whether you'll bring them back in first thing in the morning or on the way home from work.

Right now, you're probably thinking about what a bother it might be to have to put your shoes on and leave the comfortable warmth of your living room to ensure that all your trash and recycling is gone in the morning. So here's something to consider as you pull your slippers on: According to a new study by The Recycling Partnership, easy access to curbside recycling is a privilege a large number of Americans don't have.

How is this a problem? Not to get you down just as you're being reminded to take the recycling out, but landfill space problem is a real issue in the United States. As more and more garbage gets sent to the local dump, the space to leave it becomes rarer and rarer. Some landfills are already approaching capacity. And, according to the National Institutes of Health, not recycling puts a huge strain on non-renewable resources. When we don't recycle paper, for instance, more wood needs to be harvested to create fresh new sheets. And when it comes to aluminum, it takes 95 percent more energy to create it from raw materials than it does to reuse recycled metals. And making metal from scrap rather than new ore uses 40 percent less water and creates more than 90 percent less mining waste. 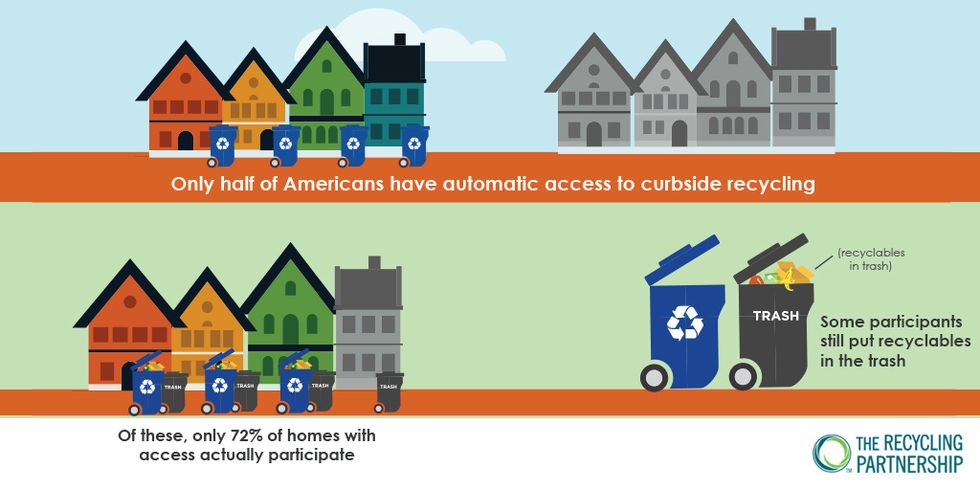 With all that in mind, it's clear that recycling isn't just necessary but something we all need to engage in to continue saving the environment. But in order for recycling to thrive and expand (especially to those who don't have access to curbside recycling), The Recycling Partnership makes clear that everyone from individuals to huge corporations need to step up and do their part to make renewing and reusing a regular and sustainable part of our lives.

"Every day we hear from citizens, communities, policy makers, corporate leaders, and other organizations who all want the same thing – a stronger recycling system," says The Recycling Partnership's CEO, Keefe Harrison. "It will take bold public-private partnership and leadership to make lasting improvements. Now is the time for action."

So how can we all step up to increase our recycling power? (Hey, it's kind of like being a superhero!) On an organizational level, it's imperative that we push for greater support of community recycling programs in our communities. And this doesn't mean that we just put out our bins every week. It means we need to lean on our governments for stronger policies and funding. That we demand corporations provide capital funding and technical assistance, and that recycling becomes not just an environmental but political issue when we're choosing which elected officials to give our support.

It's also time that we got more into recycling, too. That means making more of an effort to learn what is and isn't accepted for recycling in your community (pro-tip: check your community's recycling webpage) and understanding how the recycling system works so you know how we all play a role in making recycling successful. Maybe it means speaking to your family, friends, and roommates, or your colleagues at work. Maybe it's leading a recycling initiative at work. One thing's for certain — recycling can't succeed without all of us working together. 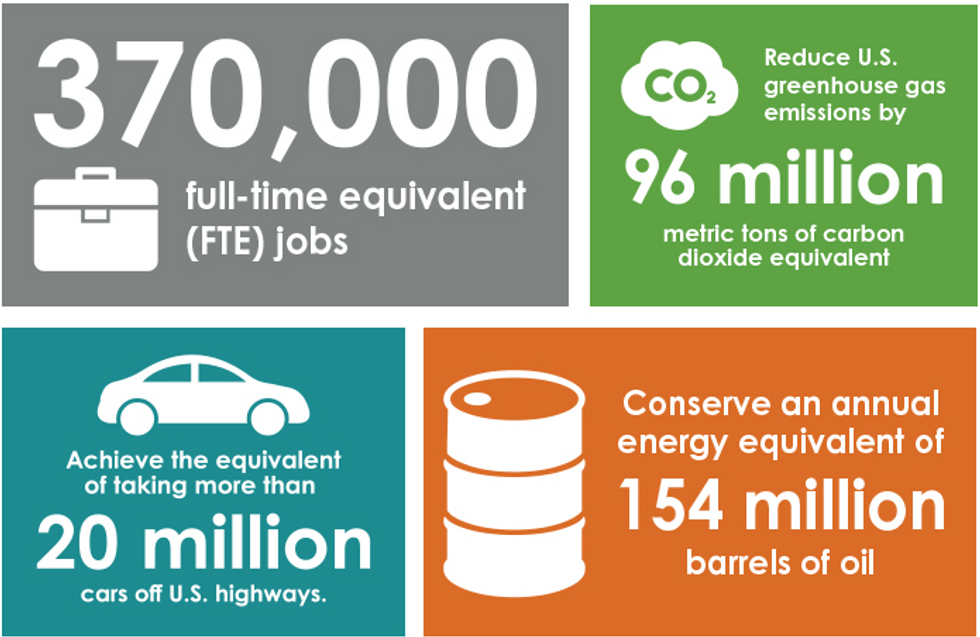 And here's what success looks like. If stakeholders from all levels of the chain participate more fully in recycling, The Recycling Partnership's study found that expanded recycling programs could result in conserving approximately 154 million barrels of oil and reducing gas emissions by 96 million metric tons of carbon dioxide equivalent. What does that look like in terms of impact to the environment? It's like taking more than 20 million cars off U.S. highways. And just as important: expanded recycling programs could create more than 370,000 full-time jobs, meaning more recycling would make a positive impact on both the environment and the economy.

That change can't happen without you.