This guest blog is courtesy of Greenmatch.

Recent data from the UK government has shown that global thinking and local action go hand in hand in terms of reducing greenhouse gas emissions. The UK is leading the way in slowing down climate change with the help of domestic households - a strategy that is equally applicable in the US.

In the UK, the current amount of electricity generated per person is the lowest since 1984, which has been a key factor in reducing greenhouse gas (GHG) emissions. This decrease has largely been thanks to the use of renewable energy, such as solar panels and domestic heat pumps.

The UK’s Committee on Climate Change has set specific goals for 2030, where their main aim is to reduce GHG emissions in the UK by 57%. When comparing to 1990 levels, the UK’s GHG emissions have been reduced by 43% already.

It is reasonable to expect domestic households to help achieve these climate goals, as they are the second largest energy consumer in the UK. The infographic below presents an overview of the UK’s progress towards their climate goals.

How Homeowners Can Help Slow Down Climate Change

A key factor to help reduce GHG emissions is to be more aware of our consumption behavior and how this affects the environment. For example, a woolen piece of clothing may have contributed to the same amount of carbon emissions as an entire month of electricity for your home.

Reducing your meat consumption, could have a huge global impact on GHG emissions. Studies indicate that by switching to a vegan diet, you could reduce your dietary carbon footprint by up to 73%. Although this might be too big of a change for many, simply eliminating lamb and beef from your diet could already make a tremendous contribution, since these production processes cause the highest amount of emissions.

Energy efficient appliances can be a great solution for reducing your energy usage. Home insulation or low-carbon heating, for example, will help to reduce your carbon footprint and will thereby lower your energy bills, too.

Another important factor – at least, when you are a frequent flyer – is to travel by train or to simply travel less often by plane. In Europe, a train journey can release around 90% less CO2 than when travelling by plane.

Additionally, in case you travel by car quite frequently, try to drive shorter distances, and consider transferring to an electric vehicle instead. Even though electric vehicles are fueled by gas or coal, their high efficiency will still help to reduce your carbon footprint in the long run.

Last but definitely not least, the most environmentally-friendly, renewable energy source is solar energy. Solar panels don’t produce any GHG emissions and thereby do not only have huge benefits for the environment, but they also lower your electricity bills!

The six most common ways in which households can help reduce GHG emissions are highlighted in the infographic below. 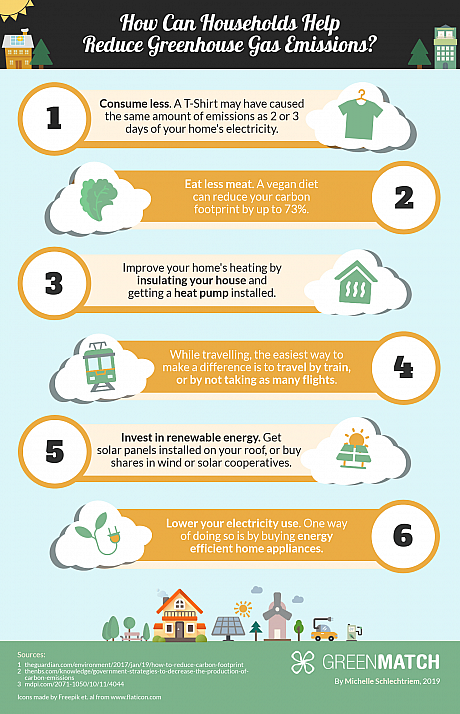