On Monday, the Intergovernmental Panel on Climate Change (IPCC) released “The Special Report on Global Warming of 1.5°C.” According to the IPCC, the report will serve as a strategic scientific input for the Katowice Climate Change Conference in Poland in December, when governments review the Paris Agreement on climate change.

The Intergovernmental Panel on Climate Change (IPCC) is the United Nation’s body which assesses the science related to climate change. It was established by the United Nations Environment Program (UN Environment) and the World Meteorological Organization (WMO) in 1988. Through the work of hundreds of scientists from around the world, the IPCC provides policymakers with ongoing scientific assessments concerning climate change, its implications and potential future risks, and adaptation and mitigation strategies. The IPCC has 195 member states, including the United States.

The findings of the latest IPCC assessment are ominous—that the world has only 12 years to keep global temperatures below 1.5°C and avoid catastrophic environmental breakdown. While urgent, climate scientists nonetheless state that keeping the world’s temperatures from rising above 1.5°C is achievable on a technological basis, at least. Immediate action can result in a more “sustainable and equitable society”.

A significant finding of the report is that the planet is already being impacted from the consequences of 1°C of global warming already occurring, as evidenced by more extreme weather events, rising sea levels, and shrinking Arctic sea ice.

The IPCC warns that allowing global temperatures to rise beyond 1.5°C “increases the risk associated with long-lasting or irreversible changes, such as the loss of some ecosystems." 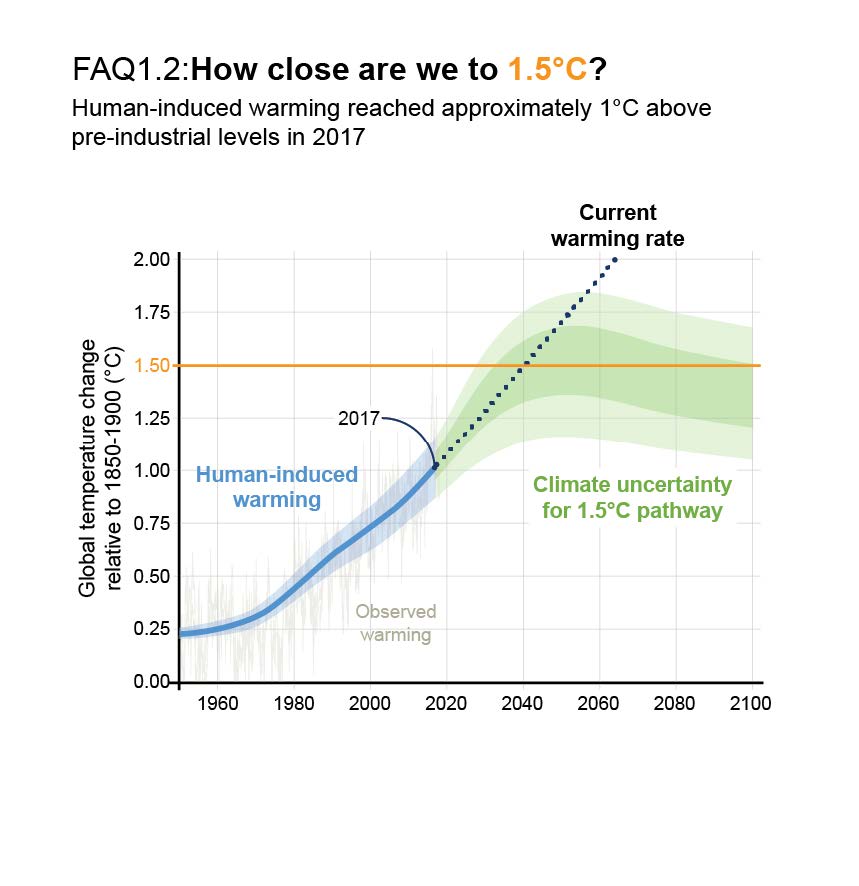 How Do We Get There?

To hold global temperatures from rising above 1.5°C, worldwide net “human-caused emissions” of carbon dioxide (CO2) would need to drop by about 45 percent from 2010 levels by 2030, reaching 'net zero' around 2050. According to IPCC, any remaining emissions would also need to be balanced by removing CO2 from the air.

While some of the kinds of actions necessary to limit global warming to 1.5°C are already being taken around the world, according to the report these steps and others would need to be adopted more rapidly. The rise of more affordable renewable and energy efficiency measures is one measure that is meeting with success in many countries. These practices and improving upon public transportation are certainly areas we can improve upon in our communities. Supporting local, sustainable agriculture is another.

Most of us know that disposing of biodegradable materials, including paper products, food scraps and yard trimmings, in a landfill results in anaerobic decomposition of these organic materials, which creates methane. Methane is a greenhouse gas (GHG) which is 72 times more potent than CO2 over a 20-year period. That is, every one ton of methane will trap as much heat in the planet’s atmosphere as 72 tons of carbon dioxide.

Landfills are the third-largest human-generated source of methane emissions in the United States. While landfills equipped to capture methane help, not all open landfills are equipped to do so. Moreover, while EPA states that methane capture systems remove 60 to 90 percent of the methane emitted from the landfill, in open landfills, however, studies indicate that as little as 10% may be captured.

Methane stays in the atmosphere for a much shorter duration—around 8-12 years, as compared to carbon dioxide which can last for centuries. But because of its potency, methane has a far larger impact on climate change during its relatively short time in the atmosphere. Thus, reducing methane emissions could offer an immediate benefit in helping to keep global temperatures from rising.

While we can expect little action on reducing greenhouse gases on a national level in the foreseeable future, I’d like to bring back a popular adage— “Think Globally, Act Locally!”

We can act locally to make a difference by stepping up our recycling efforts to keep clean, recyclable paper out of the landfill.

And, even if diversion of food scraps and soiled paper hasn’t made it on the municipal-level in your community, advocate for home and community composting! Promote the Food Recovery Hierarchy to keep food scraps from being tossed!

Together we can make a difference and be the change we want to see in the world.

NERC’s newest project, Implementing Rural Community Composting in Connecticut, Maine, Massachusetts, New Hampshire, New York, and Vermont, will focus on working with communities to divert food scraps and yard/garden trimmings to community-based compost operations. Of a scale between backyard and industrial composting systems, community composting fosters action on a local level to divert food scraps from disposal. As a part of the project, we will be developing multimedia “be a community compost expert” training resources about how to establish and sustain community composting sites. The training resources—videos, written tip sheets, and webinars—will comprise a Community Composting Training Course which will be available for download from the NERC website.