Last week’s article, Materials Management and Rural America, Part 1, presented a broad overview of some of the issues facing rural and small towns in America. As found in a Wall Street Journal analysis of rural America, based upon a number of key measures of socioeconomic, the decline in our rural and small communities is accelerating.

An ongoing series posted on CityLab, however, points out that economic growth and opportunity is “not only uneven and unequal between urban and rural places; it is also uneven within them.” Thus, some rural and small communities are flourishing, just as some urban areas are growing and thriving, while other communities, rural and urban, are on the decline.

Working in a range of small and rural communities over the past decade, I’d tend to concur with CityLab’s conclusion.

In a September 2018 Resource Recycling article, Looking Farther Afield, Natasha Duarte (Director of the Composting Association of Vermont) and I discuss food scrap diversion efforts in small towns and rural jurisdictions in Maine, Massachusetts and Vermont.

As presented in the article, effective strategic planning, dedication on the part of local stakeholders, and a focus on resident education and involvement has helped make food scrap diversion successful in a number of rural and small town communities. Similarly, just as in urban areas, small and rural communities can benefit greatly from effective implementation of source reduction, reuse, and recycling.

Beyond the potential economic benefits, materials management can help to build communities, bring citizens together, promote public participation, and help to spur a sense of community pride.

Vermont, a state comprised primarily of rural and small town communities, has become a national leader in materials management. To conserve space in its only landfill and reduce its carbon footprint, the Vermont Legislature adopted Act 148, the Vermont Universal Recycling Law, in 2012. Through a phased in time-line, the law bans disposal of the following major types of waste materials: “blue bin" recyclables, leaf and yard debris, clean wood, and food scraps.

Additionally, all towns were required by 2015 to adopt pay-as-you-throw waste collection systems. The ban on food scraps began in 2014 with the largest generators (greater than 104 tons per year), if the generator is located within 20 miles of a processing facility. The threshold has been lowered each subsequent year. By 2020, all food scrap generators, including residents, will be required to divert food scraps from disposal. 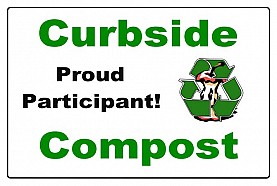 As noted in last week’s article, I live and work in Brattleboro, Vermont (population 12,000). The town is a mecca for those of us in materials management. Curbside recycling was started in the town long before I arrived. In 2013, with the urging of Triple T Trucking, the town’s contracted waste and recycling hauler, Brattleboro initiated a pilot curbside food scraps collection program.

The pilot went town-wide in 2014 with free curbside food scrap collection offered to all 5,300 households (including multi-family properties with up to four units). With the adoption of pay-as-you-throw trash disposal in July 2015, collection of food scraps more than doubled to 9.5 tons per week.

In 2016, the town became one of the few communities, small or large, to adopt every-other-week trash collection. Now Brattleboro is diverting 64 percent of its waste stream through recycling and organics diversion. Moreover, the Town of Brattleboro saves about $35,000 a year in reduced tip fees (landfill-tipping charges locally are $105 per ton).

Keeping organics local has also benefited the community. The Windham Solid Waste Management District compost facility (located in Brattleboro) processes 605 tons per year of food waste (and soiled paper) from the Brattleboro curbside collection, along with 627 tons per year of commercial and institutional food waste. The facility is a cash-positive operation. Residents can purchase compost at a relatively low cost; schools and other entities around the region have benefited from the District’s generous donation of compost.

Around Vermont, small and rural communities have certainly been aided in their waste diversion efforts by the formation of “waste management districts.” Utilizing fees paid by their member communities, as well as grants and fee-for-service programs, the districts help communities to reduce and divert waste, and provide information about trash, recycling, composting, and hazardous waste, including hauling services, drop-off centers, and more. The districts also provide technical assistance and training for businesses, schools, events, and residents in accordance with Vermont’s Universal Recycling Law.

In Massachusetts, another waste management district has become a leader in materials management in that state. The Franklin County Solid Waste Management District consists of 21 member towns in the less-populated western part of the state. The towns’ populations range from 378 to 8,455.

These are just a few examples of how small and rural communities can offer comprehensive materials management programs. Many of these efforts, including reuse and food scrap diversion, can draw upon the strengths inherent in these communities. For example, diversion of food scraps for animal feed in agricultural areas. More on this topic in Part 3.