A Solution To The Blue Wrap Waste Problem

Today’s article is by Jonathan Flanders, Co-founder and Chief Innovation Officer of Circular Blu,. It was originally posted on the Circular Blu Blog on December 19, 2017. 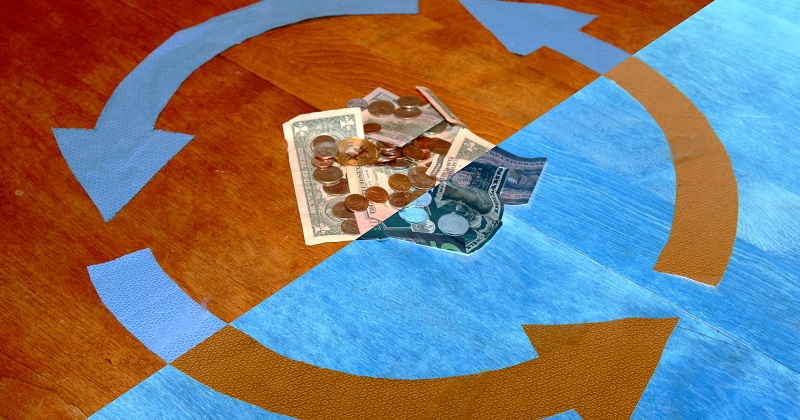 In the United States we dispose of 200 million lbs of plastic #5 that is perfectly clean and reusable, while simultaneously importing around 100 million lbs of the same exact material, mostly from East Asia.

Essentially, 100 millions lbs of plastic is being thrown away for no reason, despite Earth being in the middle of the greatest environmental crisis known to man (climate change.)

In a capitalistic society governed by climate deniers, the onus falls upon both the consumer and the free market to solve this disconnect.

The stubbornly ironic part is that part of the problem is caused by people making what has been accepted as “sustainable choices”. Bear with me, I’ll explain…

If you’re at this blog I am assuming you know what blue wrap is, and have had an ongoing struggle (or journey) deciding how best deal with this “low-hanging fruit”.

But there are lots of reasons why blue wrap ends up in the trash… or maybe even the RMW stream, increasing waste disposal costs and environmental strain (often due to incineration of RMW).

Well some of these problems are only going to get worse as the price of natural gas continues to plummet due to the increase in fracking and other methods of petro-extraction in the US.

In fact, the amount of oil produced in the US has almost doubled in recent years.

Some may consider this a good thing but the truth of the matter is that low oil prices interfere with what recyclers are paid for plastics, making it harder for recyclers to recycle and causing a reduction in plastic recycling overall.

China has recently decided to stop accepting our recyclable wastes. The U.S. Has been exporting roughly one third of it’s recycling, with about half going to china. However, that will end starting on Jan. 1st of 2018. This has created chaos in the recycling industry and recyclers are scrambling to address the issue, while plastics are just going into the trash.

However, there is a solution because there is a process that is even better for the world than merely recycling. This process is called repurposing, also known as upcycling. When Upcycled, blue wrap is not turned into recycled plastic resin, and doesn’t have to compete with the unobtainable price points derailing recyclers.

Blue wrap is essentially a nonwoven polypropylene plastic fabric, and around 80% of it can be collected so that it is perfectly clean and able to be repurposed or upcycled.

Ok, so blue wrap can be upcycled, but what could we possibly upcycle hundreds of millions of pounds of nonwoven polypropylene (NWPP) into?

The answer is reusable shopping bags and tote bags! This seems a little far-fetched right?

The answer is… maybe not.

Here are the results of a U.S. International Trade Commission search query regarding the amount of reusable tote bags imported into the US since 1999.

Then there is the staggering statistic that over 6.25 Billion reusable tote bags have been imported since 1999. Divide that by the population of the U.S. (326,814,051 at time of writing), and that means there are almost 20 reusable tote bags for every man, woman, and child in the U.S. assuming they are still around and being re-used.

I think this makes it pretty apparent that reusable shopping bags are just acting as a more resource-intensive disposable bag, completely eroding the intention behind the movement…

Here is a brief overview of the supply of blue wrap and the demand for Nonwoven PP shopping bags:

Yes that’s right… If we managed to only upcycle half of the amount of blue wrap thrown away each year we could make a huge difference.

If instead, we chose to take the material for those tote bags out of our waste by upcycling blue wrap instead of importing NWPP, in 2015 we would have:

Circular Blu is dedicated to creating circular economic products that are socially and environmentally responsible. It just makes sense to use PCR blue wrap to create tote bags. It is for this reason that we call them The World’s Most Sustainable Tote Bag.  Are you willing to take sustainability seriously and cut through the greenwashing?

Jonathan Flanders is Co-founder and Chief Innovation Officer of Circular Blu, as well as Owner and Founder of Greenfellow Enterprises. He has a B.S. degree in Environmental Science and Chemistry from Plymouth State University. Circular Blu seeks to create, promote, and sustain the circular economy. Circular Blu works with the healthcare and business sectors to divert materials from landfill and redefine the value of waste by creating sustainable circular economy products.  The article is reprinted by permission.

NERC welcomes Guest Blog submissions. To inquire about submitting articles contact Athena Lee Bradley, Projects Manager at athena(at)nerc.org. Disclaimer: Guest blogs represent the opinion of the writers and may not reflect the policy or position of the Northeast Recycling Council, Inc.