Compost and the Future of our Planet 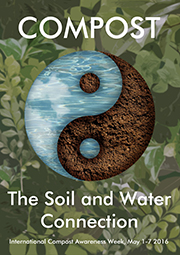 As noted in a recent guest blog by Food Tank, Seven Projects Protecting Soils Around the World, an estimated thirty-three percent of soil worldwide is degraded, and 50,000 square kilometers of soil are lost each year. Soil erosion on cropland in the United States averages seven tons per acre per year. As soils are the foundation for our food systems, these facts don’t bode well for feeding an ever growing world population.

Add to this the impact of climate change on farm production from increasing incidences of drought and flooding, and it’s not hard to imagine that the very core of life on our planet is imperiled.

Of course there’s always Soylent Green. However, before we use a sci-fi prop as a food fallback, I’d rather continue promoting the importance of composting and sustaining our soils.

This is Compost Awareness Week. This year’s theme—Compost–the Soil and Water Connection—focuses on the “need for compost as a component of healthy soil here in our country, in infrastructure development, agriculture and food production–compost’s role in everything from mitigation of brownfields, stormwater management and erosion control, and water conservation.”

I find it interesting when I talk with groups about composting and its value to soil; people often do not know what soil is or how it is formed. So, a Soil 101 refresher…

Soil is comprised of various materials, including:

Of course soil components and quality vary widely. A good quality soil contains a balance of the above materials. Human activity has a huge impact on soil quality and degradation. When we grow and harvest plants, nutrients are removed from the soil; organic matter, minerals, and the living organisms are lost to varying degrees through tilling, irrigation/water movement, and plant harvesting.

Simply put, adding compost to soil helps improve the balance of components in the soil and replaces what is lost through agricultural activities. Agriculture is not the only impact on soil, however; overgrazing, deforestation, industry, and improper development and construction also take their toll. And, then there are natural events.

In the Northeast, increases in precipitation—especially when associated with extreme events—have led to increases in flood events as well. Since 1958, there has been a 74% increase in the heaviest 1% of all precipitation events in the Northeast. More frequent and damaging storms associated with climate change increasingly impact communities in New England. Composting creates a valuable soil amendment suitable for mitigating stream erosion and building soils for green infrastructure and gardens, to help mitigate the effects of climate change and revitalize compacted and contaminated soils, vacant lots, and similarly impacted land.

Uses for compost in soil remediation and in erosion control are well documented.

The Association of American Plant Food Control Officials (AAPFCO), representing state Department of Agriculture officials from around the US, regulate claims made by compost manufacturers on product labels, literature, and websites. In their Rules and Regulations for Bulk Compost, AAPFCO has determined that the following are valid benefits of compost:

Around the country, reducing wasted food and food scrap management are buzz words in our industry. I hope, as we focus on getting food scraps out of the wastestream, we don’t lose sight of the importance of compost and the role that it can play in keeping our planet healthy.

The US Composting Council has resources and ideas for promoting Compost Awareness Week, and composting in communities, on its toolkit page.

For a great overview of the role of soil and what happens in agricultural production, check out: Nutrient cycling and maintaining soil fertility in fruit and vegetable crop systems. The Soil Science Society of America also has great resources on soil sustainability.

There are loads of Internet resources on composting, including Cornell Waste Management Institute and of course BioCycle. Food Tank is another great resource, as is the Institute for Local Self-Reliance.

ATTRA - A National Sustainable Agriculture Assistance Program – has a wealth of information on soil revitalization.

NERC’s Organics Management and Composting Guide and other organics resources are available for download.

I’ll close with words to the wise from the Smithsonian: “Without soils, life would not exist as we know it.” And, below, the new infographic courtesy of the Institute for Local Self-Reliance. 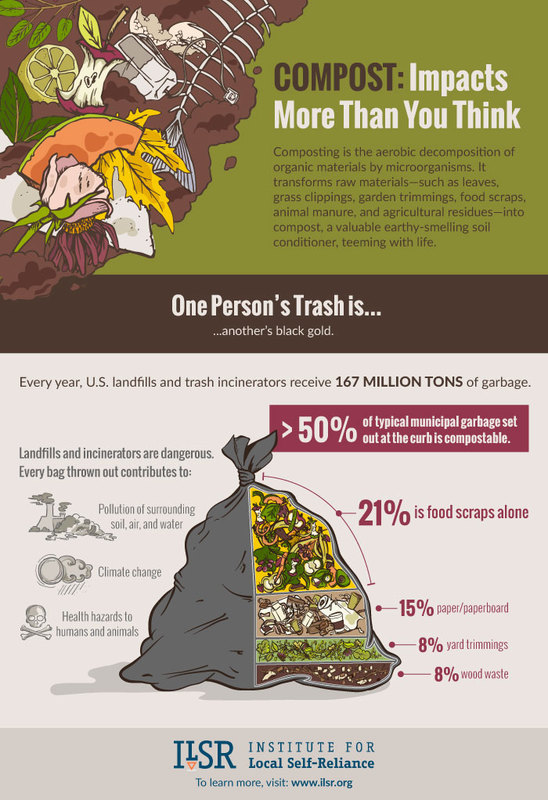