Sustainability in the Big Leagues

Part 2 of Play Ball, Recycle, and Compost presents some examples of sustainability in the big leagues.

Through its partnership with BASF, a unique awareness program called “Sustainable Saturdays” was implemented by the Seattle Mariners in 2011. During each Sustainable Saturday, highlights of what makes Safeco Field one of the greenest ballparks in baseball are presented, along with tips on how fans can practice recycling and composting at home and at the ball park.

The Mariners set their compost program on the path to success by having nearly everything used at Safeco Field be recyclable or compostable, including food service items (plates, knives, forks, cups, straws, bottles, etc.).

The Mariners’ two environmental superheroes—Captain Plastic and Kid Compost—help to promote the sustainability message by urging fans to join the "Green Team" at Safeco Field and at home. The superheroes appear on signage, recycling bins, and video features, and make live appearances during games to encourage fans to participate in the ballpark's recycling and composting efforts.

Through their food recovery efforts, the Mariners’ concessions partner Centerplate donated over 6.9 tons of recovered food to food banks in 2014. Since food recovery efforts began in 2011, almost 40 tons have been donated. During 2014, more than 1,200 tons of food waste, yard waste, plastics, paper and other items were recycled or composted, diverting over 85% of all waste generated at Safeco Field and saving the team $131,000 in waste disposal costs. In 2012 and 2013, Major League Baseball named the Seattle Mariners the American League Recycling Champions. 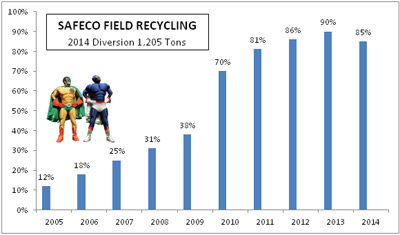 The Pittsburgh Pirates have been diverting food waste from all areas of PNC Park to composting since 2009.

The program started with the collection of just kitchen scraps. There are two food service concessionaires, Aramark and Levy Restaurants Inc., at PNC Park.  As at most ballparks, the challenge was setting up food scrap collection at multiple dining facilities. At PNC Park, these include the concession stands, in-park restaurants, and “public-facing” restaurants that open up to the park as well as to the sidewalk on the outside of the park. Compostable food serviceware has been integrated into all stadium dining areas.

In 2010, the Pirates initiated food scraps diversion throughout PNC Park, including the stadium seating area referred to as “the Bowl.” Unlike Safeco Field in Seattle, there are no sorting stations for fans to use in PNC Park. Fans regularly leave behind uneaten food and containers under their seats, and at the conclusion of each game crews go row by row through the Bowl to collect bulk trash. A green team follows to collect recyclables.

The bulk trash is then brought to the ballpark’s recycling center (located in the service tunnel) where compostable paper and food scraps are removed. The compostables are then transported from the recycling center in yellow tip carts and emptied into yellow, two-cubic-yard containers provided by AgRecycle, headquartered in Pittsburgh. The containers are serviced in the morning following every home game by AgRecycle.

By 2015, PNC Park was diverting more than 75% of its wastestream through recycling and composting. 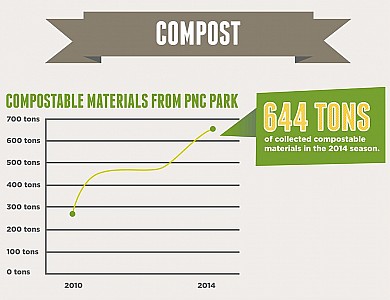 At the center of sustainability efforts at CHS Field, the new home of the minor league team St. Paul Saints, was the determination to make it a zero waste facility.  The stadium’s recycling and composting programs were designed by the Saints in cooperation with Minnesota Waste Wise, an initiative of the Minnesota Chamber of Commerce that works with private businesses throughout the state to minimize and creatively divert waste.

The ballpark also received a Minnesota Pollution Control Agency grant to purchase more than 30 color-coded bins—green for organics, blue for recycling, gray for trash—which are placed throughout the concourse, clubs, and suites for collection of materials.  Through a partnership with Biz Recycling, the Ramsey and Washington County Resource Recovery Project, the zero waste message is promoted to fans at all games in fun and entertaining ways, including interactive kiosks, PA and video board announcements, between-inning competitions, and compost giveaways.

Volunteer “Recycling Umpires” are posted at every zero waste station to provide hands-on education about the facility’s waste reduction efforts and to gather fan feedback. Comprehensive trainings are also provided to all Saints’ permanent staff, gameday staff, vendors, and volunteers.

Levy Restaurants/ProSportsCatering, the company managing CHS Field’s food and beverage operations, recycles and composts from the back of house. The company also purchases recyclable or compostable material for food and drink containers and other serviceware.  Working through its waste hauler, Walter’s Recycling, the team is able to collect data and track recovery performance throughout the season.

According to Saints’ Executive Vice-President Tom Whaley, “Sports facilities are real pigs when it comes to waste production. Reduction and creative disposal of the waste stream were key factors affecting the design and operation of the ballpark.”

The environmentally responsible initiatives at CHS Field have been sponsored by founding partner Ecolab, a St. Paul-based company. CHS Field was named the Greenest New Ballpark by GreenSportsBlog.

It’s not easy to compost at ballparks, because most have multiple food preparation and service areas, including private suites, clubs, restaurants, concessions, and the stands.

As with any large food waste generator, successful composting programs require strong commitments from team ownership. Such commitments can be more successfully signalled through the adoption of official environmental or sustainability policies. Stadium staff and food vendors are more likely to commit to such programs if they believe team ownership has as well.

Implementing purchasing and service policies that specify preferences for environmentally sound products and services is a must. Environmental language should be included in all requests for proposals and contracts, to ensure that certified compostable or recyclable serviceware is used in the stadium.

Start with food scrap diversion at the back-of-the-house, working with stadium food service concessionaires.  Then add containers for fans, and work with staff or volunteers to monitor the stations and to separate trash collected from the stadium after the game. Simple messaging and fun promotion works effectively to get fans onboard. Color-coded bin stations and consistent signage are also essential for collection in public areas.

Coordination and employee support can be achieved through establishment of “eco-teams” and a zero waste supervisor for each shift. Make sure that there is clear and multilingual signage on collection containers and compactors. These areas should only be accessed by designated personnel.