Earth Day: The Times they have Changed…

Earth Day—April 22—was founded in 1970. Many people point to it as the “birth of the modern environmental movement.” Certainly in numerous ways our environment has vastly improved since the first Earth Day brought increased awareness to the environmental issues of the day. Air pollution from cars and industry has undoubtedly declined and our rivers no longer catch on fire. DDT is no longer used…at least in this country.

Gaylord Nelson, then a U.S. Senator from Wisconsin, got the idea for Earth Day after witnessing the ravages of the 1969 massive oil spill in Santa Barbara, California. 20 million Americans participated in the first Earth Day, leading to the creation of the United States Environmental Protection Agency and the passage of the Clean Air, Clean Water, and Endangered Species Acts.

Ironically, yesterday was the fifth year anniversary of the BP Deepwater explosion which killed eleven people and sent oil spewing into the Gulf of Mexico and along the Gulf Coast. Sadly, the impact of the oil spill is still wreaking havoc around the Gulf and its coastal communities.  Much of our industry has left the country, but it is still making consumer and other products. And, the pollution from these operations is still being felt, however, now it’s often in “developing” countries such as China, India, and Vietnam. Drought and climate change, whether you believe it’s human-caused or not, is having a huge impact around the world. Water is quickly becoming the new resource scarcity issue.

Around the world hundreds of species go extinct every day and biodiversity is on rapid decline. Forests are ravaged to provide paper, furniture, and other wood products for growing populations of aspiring middle class people and the large appetite for new paper products in developed nations. Agribusiness discharges nitrogen and phosphorus from petroleum-derived synthetically produced fertilizers into the world’s waterways in an effort to not only feed the growing masses, but meet the tastes of the growing world population. GMOs are now in a significant amount of food sold in this country. Whether you think they are good or not, evidence suggests that GMOs have allowed agribusiness to spray unlimited amounts of Glyphosate (a broad-spectrum systemic herbicide found in weed killers such as Round-Up™) and other chemicals on our nation’s farmland.

Yes, our impact on the world has changed, better in some ways, more insidious in others. The environmental issues we face are in many ways the same, but also profoundly different. There is a lot of discussion about creating more sustainable economies. Can we harness technology to help solve the world’s environmental issues? Certainly solar and other renewables can be used to wean us off of our petroleum-based economies. New laws and regulations will need to be discussed and implemented around the world to help guide the development of technology—whether it’s to frame the development of genetically-modified foods, fracking, or mining resources in remaining frontiers—the ocean, the Arctic, and the Antarctic.

In the world of waste we have also seen huge changes in this country. A majority of our population has access to curbside recycling. Our waste has reduced, although recycling has remained stagnant for a number of years now. Zero waste has been embraced by many manufacturers. Cities, including San Francisco and Portland, have implemented curbside food scrap collection and have successfully diverted more than 50% of their wastestream. Interest in diverting food scraps from the wastestream to composting and anaerobic digestion is growing around the country and other parts of the world.

Whether we like it or not, single-stream recycling has changed the face of recycling collection and processing. The technology has certainly improved over the years since single-stream plants first came on-line. Like much of our technology—including electronics—our education programs and policies for dealing with the impact of this technology has lagged behind. Communities have embraced single-stream; however, residents remain confused about what “single-sort” or “all in the bin” actually mean. Fortunately organizations are coming together to formulate new educational approaches to this new technology.

At NERC’s recent spring conference we had the opportunity to tour a ReCommunity single-stream recycling operation in Delaware. Impressive technology to say the least. The contamination coming in from residents though was indicative of the issue single-stream facilities are grappling with…large volumes of plastic bags and visible contaminants ranging from tennis shoes to toys. The resulting product looked good given the inbound material; still some visible contaminants, mostly plastic bags, wound up in material bales. But the facility successfully markets its materials and has a reported residue (contamination) stream of just around 13%. Undoubtedly, the debate will continue, however, about the impact of single-stream and the “evolving ton” on waste diversion and on using recovered materials in manufacturing.

I’ll leave you with a montage of photos from our ReCommunity tour. 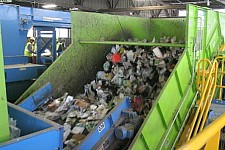 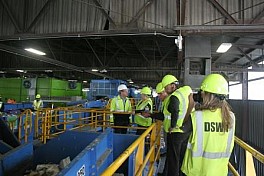 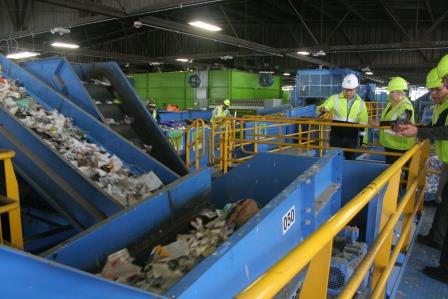 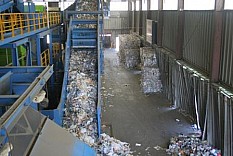 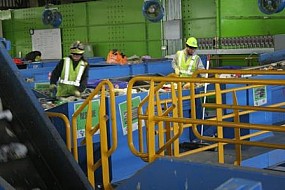 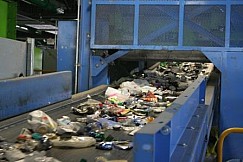 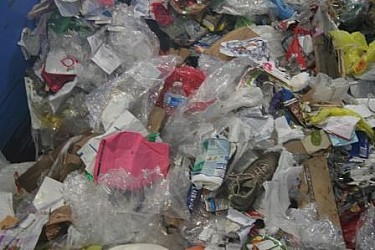 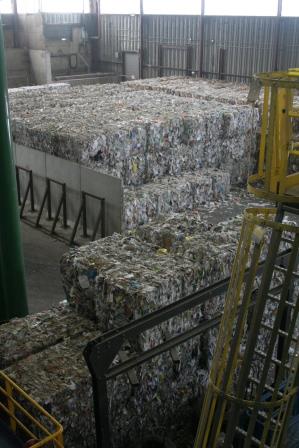