Which Products Are Being Returned? The General E-cycling Trends Amongst Product Types

Today’s Guest Blog is by Jason Linnell, the Executive Director of the National Center for Electronics Recycling. It was first posted in the inaugural edition of the E-Scrap Insider.

The data on collection by product type is limited since in several states reports only require a total pound value to be reported. But, data by product type is useful to see if any products are coming back in higher quantities or if we are starting to see the high volumes of CRTs decline. In Maine, 82% of the 7.4 million pounds recycled came from televisions. This was followed by 14% monitors, 5% printers and a nominal percentage of game consoles.

Keep in mind that Maine does not cover desktop computers, and includes the totals for laptops under monitors. Not surprisingly, Maine’s results are heavily weighted towards TVs when other products are excluded from the calculation. The next two states are more similar in covered products and entities than Maine.

Oregon combines desktop and laptop pounds under the “computer” category. The same is true for Washington, which has a similar but not identical set of covered entities as Oregon. TVs were roughly equal for Oregon and Washington in 2012 at 75% of the total weight. Computers comprised 7-8% of the returns in both states and monitors comprised 17-18%.

Vermont and Wisconsin don’t require a full year report of pounds by product type, but do sampling or other periodic testing to determine the breakdown.

In Wisconsin, one fourth of the collectors reported the breakdown of what they received to Wisconsin Department of Natural Resources (DNR). Televisions represented 64% of the returns, while monitors and computers were 10% and 7% respectively.

Vermont conducts two random waste sorts to identify the amount of each type collected. The results are not intended to be statistically valid, but the information helps track trends. 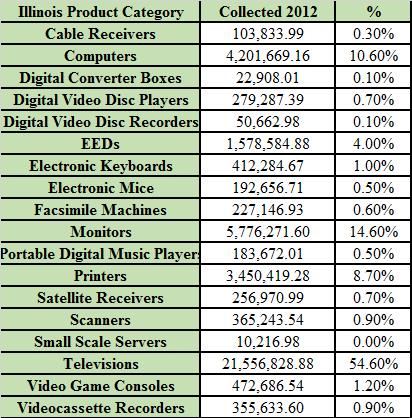 Finally, in Illinois, we still see TVs as the dominant weight, but because of the large number of categories reported, it is the lowest overall percentage amongst all of the states (54%). 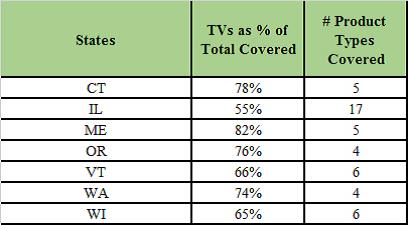 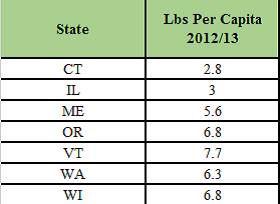 In summary, TVs are not unexpectedly the dominant weight in all states, and can vary from 54-82%. But, the differences in the denominator (that is, the number of product types tracked and reported) makes any comparison across states impossible. In the next issue, we will look at the few examples of year-to-year changes of product types returned within these states.