Although I had a degree in International Relations, had spent a semester at the UN, and made a career in the science of development, I racially profiled someone in Singapore in 2005.    I know it now.   I deserve a rusty radiator for racism.

On my way back from Guangzhou, where I had gone for a second visit to see the second-hand shops of Foshan and the "Big Secret Factories" of CRT reuse, I stopped in Malaysia and Singapore for a couple of days.   Armed with my camera, I decided to hunt for some "exotic photos" to prove that I too, like Jim Puckett of BAN.org, had "been there". Now, Interpol is trumpeting their act, with a project to describe their efforts to arrest "criminals" I refer to as the "geeks of color".

I understand where David Higgins group at Interpol is coming from.  E-Waste is in the news, and we want to show our credibility, show we have been there, walked the streets, and have seen the problem.  We work for the (world) government, and are here to help.

The shop below I presented in a PowerPoint slide at a NERC.org conference as an example (an olive branch to Puckett and Westervelt) of clearly bad imports.   I had stayed on the street, waiting for the man who owned this shop (Mr. Teck Recycle) to roll up the metal door.  He had a ladder on the inside, which he needed to physically climb up to the ceiling to start to descend items for resale on the street. 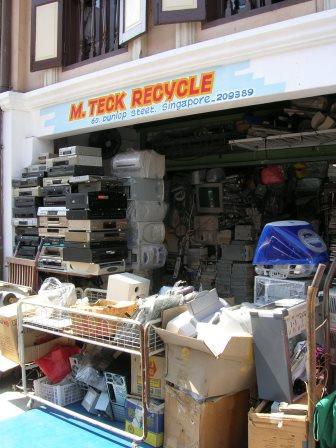 It seemed the guy had packed this 4M x 15M street shop "to the gills" with imports, and was never going to be able to reuse it all.

I confess that I assumed this was all recently imported material.  I had absolutely no evidence of that. We now know that the 6 billion people in the "non-OECD" generate far, far more used electronic scrap than the OECD does.

Singapore, though not "OECD", was already as wealthy then as California.   It had become wealthy via the "Tinkerer's Blessing", the reuse and refurbishment trade, which evolved into contract assembly, then into ODM (Original Design and Manufacture).  Sure, some of this material may have been imported, but I had no idea how long before Mr. Teck Recycle got it.   What percentage came from residents of Singapore, which at that time had a higher percentage of engineering degrees, and higher percentage of online high speed bandwidth, than the USA's Silicon Valley?   Why did I immediately assume the Singaporean shops were filled with USA "toxics along for the ride" (a phrase I pounded at the NERC audience?)

Sure, it was a sound theory.  Maybe some of this stuff did come "along for the ride".  But I had no proof, all I had was a need to position myself not-too-distantly from Basel Action Network's "80% Primitive Recycling" export statistic, which we now know is no more true than 80% of Los Angeles black teenagers are gang members and high school drop outs (BTW that's said tongue in cheek, it's obviously untrue, but the fact I have to apologize and point that out shows the root of whitey's problem). Profiling.

The photo, above, was taken by our head technician at Good Point.  He found his own "Mr. Tech Recycle" of Agbogbloshie, Ghana.   But Eric grew up in Ghana, has family there, knows how to repair goods, and know that cities like Accra and Lagos have MILLIONS and MILLIONS of households with Televisions.

It reminds me a lot of the Singapore shop at top.   But now I know things I didn't know then.  Now I have stood on the street of the "E-Scrap" market of Lima, Peru, where Ramzy Kahhat studied the trade.  Kahhat demonstrated 87.5% import for reuse when all the containers were accounted for.  And on that street, the TVs I saw being broken down for copper, came from people who had collected them INSIDE LIMA, a city of about 10 million residents, whose main problem is traffic jams.

All we know for sure from Eric's photograph of the Ghana TV repair shop is that he is probably innocent of any "e-waste" crime.  He certainly should be presumed so, and white people who take pictures of Africans at scrap yards haven't proven otherwise.

My thinking has evolved to where I can no longer assume anything about Eric Prempeh's photos from Ghana (about 80).   Sure, I see junk in the photos, but I don't know whether the junk was used for 5-15 years in Accra and was traded in here, like a used car, for one of the newer pieces Mr. JTB repairman sells.   He is a TV repairman, after all, and what I found among TV repairmen in Worcester, MA in 1998 was smart guys who had junk TVs abandoned on them all the time.   So many people brought in a TV for repair, and then changed their minds, that most TV repairmen in Massachusetts were charging $50 "just to look at it", to cover their cost of junk.   Dick Peloquin of Advanced Electronics, one of those TV repairmen, had opened up second hand shops to try to sell some of the pieces he repaired which the original owner decided not to pick up, preferring to buy new.

The presence of scrap Japanese autos at USA junk yards does NOT prove that Japan is dumping "a-waste" in the USA.

Dick went on to found Electronicycle, which became the largest TV recycling facility in the USA by 2002, and which eventually sold to Electronics Recyclers International.  I became Dick's VP for 2 years, and learned much of what I know there.

Part 2 of “Cultural Gulfs in Developing Markets 7: The Rusty Radiator Awards” will be posted in next week’s NERC Blog.

NERC welcomes Guest Blog submissions. To inquire about submitting an article contact Athena Lee Bradley, Projects Manager. Disclaimer: Guest blog’s represent the opinion of the writer and may not reflect the policy or position of the Northeast Recycling Council, Inc.