The Berkeley County Organics Recycling Program accepts brush, Christmas trees, leaves, grass clippings, and garden waste. Residents are asked to drop-off brush at a designated area at the Recycling Center. Typically, the brush is ground bi-annually into mulch by County staff. The ground mulch is left onsite and sold to the public at $12 per bucket load.

In addition, the County’s residential waste hauler provides a fee-based curbside collection of organics that is also delivered to the two recycling drop-off centers that accept organics.

The Berkeley County SWA also offers a free seasonal collection for deer carcasses. The program was started in an effort to reduce open dumping by providing a more environmentally sustainable alternative for the hunters. The deer carcasses are mixed with compost at the Recycling Center in a 20-cubic yard roll-off container to reduce odors. When full, the container is hauled for composting at the Lyle C. Tabb Composting Facility.

The cost to grind brush into mulch at the two organics recycling drop-off sites amounts to $45,000 - $65,000 per year. These costs are a significant part of the $240,000 annual budget for the Solid Waste Authority’s recycling program.

The costs are offset by selling the mulch for $12 per bucket. In addition, residents are charged a “cost sharing” processing fee of $5 per load to drop-off brush. In 2011, the fee and mulch sales generated $31,000 for the overall recycling program. The remaining costs were absorbed by the Authority’s operating budget for its recycling program and/or offset by state grants.

The Lyle C. Tabb Composting Facility accepts the program’s mixed leaves, weeds, grass clippings, and garden debris without charge. Typically, the transportation costs to the composting facility are around $6,200 per year. These costs are funded as part of the recycling program operating budget. 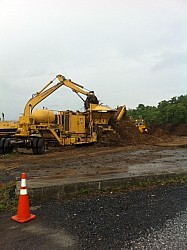 Brush is piled at the two organics recycling drop-off centers. About every six months, the material is put through a grinder. The tub grinder is owned and operated by a private vendor; the vendor is selected by a competitive bidding process.

The Berkeley County SWA owns and operates a John Deere skid loader to load the mulch. The unit is also used for recycling center maintenance activities and miscellaneous compaction uses. The skid loader was purchased with a West Virginia Recycling Assistance Grant.

In 2011, the organics recycling program collected and recycled 1,880 tons of brush. In addition, the program collected 348 tons of leaves, grass clippings, and garden debris. Also, there was 6,000 pounds of deer carcasses collected.

Recycling tonnages are expected to be significantly higher in 2012 due in part to the June 29, 2012 extreme storms that impacted the region (a derecho). This unusual windstorm generated tremendous volumes of brush which was delivered to the County’s organic recycling program. The County was declared a national disaster area, eligible for FEMA funds. FEMA estimated $45,000 of recycling program expenses were associated with this event.

In 2011, the recycling program had 99,483 participants. A “participant” is defined as one vehicle; which is measured by an electronic vehicle counter. There is no data specifically for participants bringing in organic material alone. In addition, there were 374 subscribers to the yard waste curbside program, generating 4,596 bags for pickup.

In time, yard waste, particularly grass, corrodes steel. The Authority has found it best to place thick amounts of paint on the inside of the roll-off containers to reduce corrosion. 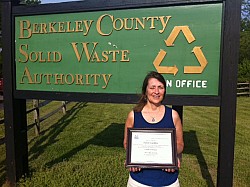 For the complete case study and other organics management case studies and resources, check out NERC’s website.