It’s Time to Change the Conversation Regarding Clothing Recycling

Today's Guest Blog on textile recovery and recycling is by Jackie King, Executive Director of the Secondary Materials and Recycled Textiles Association (SMART).

Each day, millions of people around the world collect and recycle paper, aluminum, glass and plastic products without a second thought. This has been true for many years as a result of the educational efforts which began with the first Earth Day on April 22, 1970. Unfortunately, the first "Earth Day" environmentalists did not include clothing and textiles as household materials to be recycled.

Steps toward Zero Waste for Contractors and Builders, Part 3

This article—describing the costs and benefits of recycling C&D—continues our blog series on laying out a "roadmap" for builders and contractors on moving towards zero waste for construction and demolition projects. Zero waste is a path that can lead to savings and profit. Zero waste does not actually mean "zero waste," as some think. Instead it is a goal and en route to that goal, great change and value can be achieved. And, contractors can realize cost reductions by following this path. Zero waste in construction and remodeling projects focuses on looking for opportunities:

Zero waste in construction and remodeling is a win-win proposition, and not as hard to do as you might think.

Maximizing the Value of Recycling 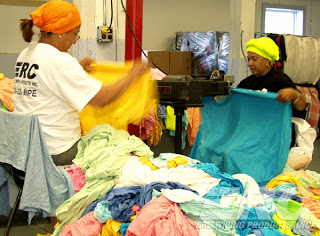 I have been in the textile recycling business for over 35 years, When my kids were in school they were often teased that their dad sold rags. Well today they are very proud that their father is involved in helping the environment by diverting and recycling millions of pounds of textiles annually. You can help too!

Everyone has heard the term don't be Judgmental; when it comes to clothing and other household textiles the truth is you should not be judgmental when you take your clothing to your favorite charity or clothing recycler. Just grab the biggest bag you can and throw it all in there. No need to decide if the clothing or shoes are wearable or desirable.

3-D printers are all the rage in the tech world. Now, Filabot has come up with a desktop extruding system that can grind plastics to make spools of plastic filament for 3D printers. The system claims to be both user friendly and environmentally friendly. The Filabot can process a wide range of plastics, including milk jugs, soda bottles, LDPE trays, bottle caps, and more to make new filament for printing.

3-D printers can "print" nearly any object, but require expensive plastic filament to melt down and form into the thin layers of material that become the 3-D print. Filabot could prove to be really handy around the office…a recycling center right on your desk! And, significantly lower the costs of 3D printing!

The United States Environmental Protection Agency estimates that 13.1 million tons of textiles were generated in 2010, or 5.3% of our country's total municipal solid waste (MSW) generation. Approximately 14% of clothing and footwear and 17.1% of items such as sheets and pillowcases were recovered for export or reprocessing in 2010. In 2010, 15% of all used textiles were recovered – some 2 million tons.

According to the Council for Textile Recycling the average U.S. citizen throws away an astounding 70 pounds of clothing and other textiles each year.

A wide-range of used and unwanted textiles can be recovered for reuse and recycling. These include clothing, shoes, accessories (belts, gloves, handbags, etc.), as well as household items, from linens and curtains to bedding, towels, and rugs.

Nearly 100% of unwanted household textiles and clothing can be recycled, regardless of quality or condition.