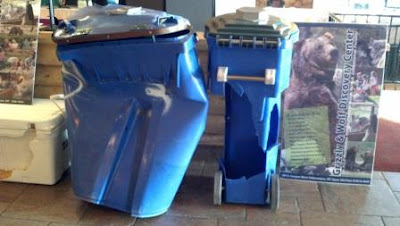 I guess the bear tossing my compost bin isn't so bad after all!

Jeff Bednar, former NERC Board Member and Board President representing Pennsylvania, continues our series of guest blogs by people who have been influential in NERC's 25 year history.

Here's what he has to say:

My introduction to NERC came many moons ago as a new program analyst at the Pennsylvania Department of Environmental Protection. I was asked to accompany the Pennsylvania representative to a meeting and provide an update on some sustainability endeavors undertaken by the department. As a recycling neophyte, I was practically crushed by the sheer volume of knowledge, intellect and recycling industry acumen that this collective of professionals possessed.

I first became involved with NERC in summer 1994, while I was a recycling market development manager with the California Integrated Waste Management Board. After seeing an ad for the Executive Director position, I pondered my options. Of course I was familiar with NERC's pioneering work negotiating voluntary agreements with newspaper publishers and other industry engagement efforts. And after meeting the staff and members, and discovering that Brattleboro was a great place to live, I pursued the job and soon found myself driving cross country to Vermont.

From Legislative Orientation to Markets

At the time, NERC was transitioning from a legislative orientation to a market development orientation. A recession was deepening, and the mantra then as now became jobs, jobs and jobs. Along with staffers Michael Alexander, Ellen Pratt, Mary Ann Remolador and Rebecca Bartlett, and the Executive Leadership Team of Jeff Lissack (MA) and Janet Matthews (NY), and later Guy Watson (NJ) and Randy Coburn (NY), NERC pursued directions we hadn't conceived of previously. We teamed with regional investment…

Occasionally in NERC's blog, I am showcasing companies in the Northeast that use recycled materials in the manufacturing of new products. Today's entry connects three companies – Red Hook Brewery, Poly Recovery, and Foss Manufacturing. 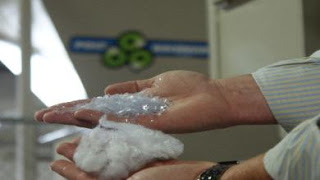 "The Recycling Trifecta" is a video which shows how Poly Recovery, a full service recycling company located in Portsmouth, New Hampshire, worked with Redhook's Portsmouth Brewery to find markets for its plastic waste—including green PET packaging strap used to hold boxes of bottles. The recovered plastic is turned into fiber by Foss Manufacturing to be used in such items as linings for automobile trunks and indoor and outdoor carpet.

Foss Manufacturing is a manufacturer of engineered, non-woven fabrics and specialty synthetic fibers…

One of the easiest and overlooked strategies for decreasing waste and increasing recycling at work is to focus on paper. There are many strategies that can be used to reduce the amount of paper used, and to capture the unavoidable wasted paper for recycling. Following are a few examples:

Tips for Paper Use Reduction & Reuse

Sharon Yergeau, with the New Hampshire Department of Environmental Services, continues our series of guest blogs by people who have been influential in NERC's 25 year history.

The NH Department of Environmental Services (NHDES) established the Planning & Community Assistance Section around 1990. The legislative charge was to "develop and implement a program of technical assistance and cooperation with municipalities and solid waste districts." The 5-person section, including a Recycling Coordinator, was assigned to my bureau, which already included P2 and hazardous waste tracking. Mark Lennon (now of IRN) started in 1992 as our Recycling Coordinator and before too long, was fully engaged in NERC activities. Mark continued his involvement when he was promoted to the supervisor of the section. When Mark left in 1996, the new supervisor (Christopher Way) threw himself into NERC activities. In 2004, when Chris' job was eliminated and he was assigned to another program, I was "it." When my own position was moved to the Commissioner's Office two…