Diverting construction and demolition waste to reuse and recycling is an important topic in the U.S. and on the island of Puerto Rico. NERC is organizing two training C&D reuse and recycling trainings in Puerto Rico (one in Guaynabo and the other in Ponce) to be held on October 17 & 18.  The brochures and email flyers for the trainings are now available in English and Spanish at http://www.nerc.org/projects/index.html#CDPR

Reflections on NERC and Recycling

Tom Houska, Senior District Manager for the Delmarva Peninsula at Waste Management, Inc, takes a moment to reflect on NERC and recycling.

Here's what Tom has to say:

How did you first get involved with NERC?
I was working for the Delaware Solid Waste Authority (DSWA) – the agency representing the State of Delaware on NERC. My boss, N.C. Vasuki, appointed me to the Committee.

What were you "doing" then, and what you're doing now?
At DSWA I had several roles throughout my 16 year tenure. When I retired from the DSWA five years ago I was the Chief of Administration. I was responsible for financial forecasting, regulations and compliance, strategic planning, recycling operations, political liaison, marketing and public information. When I left DSWA I took a position with Waste Management, Inc. - Senior District Manager for the Delmarva Peninsula. I am still in that position today.

Forget the Travel Mug…Eat the Cup!

The coffee of the near future may be coming to you in an edible cup made out of pastry. Drink your coffee and eat the pastry! And, since there is no dish to wash, it saves on water too.

Coming to your local coffee shop soon! (or, at least the nearest Starbucks!)

Thoughts about NERC and Recycling

Mike Giuranna, Solid Waste Specialist, with EPA Region 3 Office of Materials Management, continues our series of guest blogs by people who have been influential in NERC's 25 year history.

Here's what he has to say:

When did you first become involved with NERC and how long were you actively involved?
In 1997 when I moved into Solid Waste Program with EPA, Region III in Philadelphia.

How did you first get involved with NERC?
Attended a NERC meeting, I believe in Atlantic City, NJ. Was also involved with an EPA Grant to NERC.

What were you "doing" then, and what you're doing now?
Working with EPA, Region III in Solid Waste, landfills and recycling /composting, and I'm still doing the same thing.

What are some of your fondest memories of NERC?
The meetings, some of the discussions on Solid Waste topics, networking with NERC staff and State and local solid waste people were always interesting.

What do you consider to be NERC's greatest…

Take Another Look At Recycling

Recycling programs like other programs need to be reviewed, analyzed, and revised. Many changes occur over time that we may not be aware of because we're focused on our primary work. Examples of some of these changes are: new business practices that may generate different waste material or increased waste, staff turnover or downsizing, complacency, etc. Making the time each year to evaluate the recycling program will allow businesses to make the necessary changes in the program to accommodate…

Vietnam is a complex country – communism and capitalism working hand-in-hand. According to the BBC, Vietnam intends to be a "developed nation" by 2020. As a developing nation, traditional lifestyles are evident side-by-side with economic growth.

At the recent U.N. Conference of Sustainable Development, beautiful works of recycled art were displayed. They are made out of discarded plastic bottles on the Botafongo beach and are illuminated from the inside at night.

See more photos of the amazing works of art. 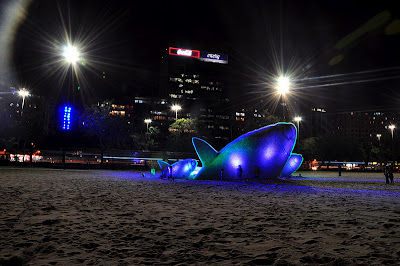 See more of these fascinating scrap robots at a Robotic Showcase.