Cynthia L. Greene, Manager of US EPA New England, Energy and Climate Unit, continues our series of guest blogs by people who have been influential in NERC's history.

When did you first become involved with NERC and how long were you actively involved?
1990 to 2006

How did you first get involved with NERC?
On a paper recycling study and as a grant project officer.

What are some of your fondest memories of NERC?
NERC quarterly meetings and the fruitful exchange between the states, working with the Direct Marketing Association and the Post Office on recycling, the ground breaking work on determining the economic benefits of recycling, and the venture forums.

What do you consider to be NERC's greatest strengths? Greatest achievements?
The dedicated and creative staff and members. ONP - newspaper publishers'…

I'm sure professionals in a lot of fields take pictures relating to their jobs while on vacation. I know I do! I have always found examples of trash, recycling, and composting in other parts of our country or the world to be interesting.

I had the privilege of recently spending six days in the City of Vancouver, British Columbia. While walking around I noticed that paper set out for curbside collection was placed in plastic bags, while hard recyclables went in the blue box. Reading about the program, I discovered that Vancouver's Blue Box Recycling Program was implemented City-wide in 1990 and now provides service to over 100,000 households. Residents are provided a blue box (for metal, glass and plastic containers), a reusable yellow bag (for mixed paper products) and a reusable blue bag (for newsprint). Residents sort their recyclable materials into the appropriate bag or box and on collection day, set them out for collection. Using reusable bags is undoubtedly a way to hold down costs associated with recycling bin purchases.

As we recognize NERC's 25thanniversary, we are continuing our series of guest blogs by people who have been influential in NERC's history. Connie Saulter, was NERC's second Executive Director.

Here's what she has to say.

First of all, I would like to say Congratulations to everyone who has been involved in the Northeast Recycling Council since its inception. That NERC is celebrating its 25th Anniversary speaks volumes to a dedicated number of individuals and agencies who maintained a strong vision of the importance of a public/private partnership toward solid waste/recycling initiatives.

When did you first become involved with NERC and how long were you actively involved?

I joined NERC in the fall of 1990, when NERC consisted of just Shelley Dresser [NERC's 1st Executive Director] and me, and we worked from Shelley's home. When I left in the summer of 1995, NERC had real offices in downtown Brattleboro and four full-time staff.

How did you first get involved in NERC?

I put it on the Curb

…Where does it go? 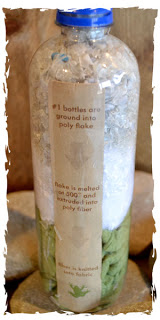 I've been in the recycling field for more than 20 years and still get asked that question. As an occasional article for the NERC Blog I thought I would showcase companies in the Northeast that use recycled materials in the manufacturing of new products.

EARTHTEC is a company headquartered in Portsmouth, New Hampshire. EARTHTEC manufactures clothing out of recycled PET bottles. The company has manufacturing facilities around the world, including Portsmouth.

"We build cool clothes that go easy on the planet.
We are outdoor people. Our favorite place is Earth... We're into green.
We eat technical. We breathe comfort. We live fashion.
Our team is made up of apparel industry vets with endless passion for building products made only from cutting-edge…

NERC is celebrating its 25th anniversary. NERC staff have worked with countless individuals through the years—board members, advisory members, funders, project participants, and others. We set about to identify who we felt were the most influential people in NERC's history. We asked people to share their thoughts about NERC and its history to be posted in the NERC blog. To help them out we asked them a couple questions.

Lois B. Hager was a former NERC Board Member representing the State of Connecticut. Her responses reveal some of NERC's early history.

Tell us about yourself first. When did you first become involved with NERC and how long were you actively involved?

I was one of the original representatives. Victor Bell in RI, John Schall in MA, and I in CT were organizing our state's recycling programs. We decided to try to help each other and met in RI to discuss our programs and needs. This must have been in about 1987 shortly after CT's mandatory recycling act was passed by the legislature. I…

Disasters Strike in Many Ways

When natural disasters hit, of course we immediately feel for the victims. As the days go by, our thoughts continue to be with those who are suffering; however, as solid waste professionals, we can't help but wonder about all the debris generated by the disaster.

While traveling recently in the Pacific Northwest, I was also struck by the longevity of disaster debris and the many ways it can impact us. Debris from last year's devastating earthquake and tsunami that hit Japan began washing up along the coasts of Oregon, Washington, and British Columbia, alarming residents, environmental scientists, and government officials. Some 1.5 million tons of debris is estimated to be heading toward the Pacific Northwest beaches. The primary public concern was that the debris potentially holds invasive species that could pose a serious threat to marine environment and native species. Government official concerns were about how will handling the debris be paid for in today's tightening budgets. Lawmakers in the Northwest are asking for federal emergency assistance, a new twist…