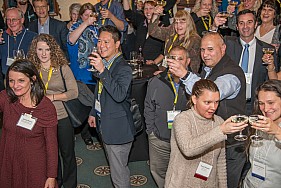 We would like to give a special thank you to the 30th anniversary sponsors, and the committee that helped throughout the year to celebrate this special occasion.

NERC is celebrating its 30th anniversary this year and we'll be honoring the occasion in several ways.  In the fall there will be a big party, and throughout the year there will be Email Bulletin articles, blogs, social media and other types of acknowledgement.  This page will be updated as well to reflect the scope of our history.

We've received reminiscences from friends of NERC.  Here are a sampling:

In 1987, when NERC began in Shelley Dresser's kitchen, recycling was in its infancy.  There were few state or regional programs, and little supporting infrastructure.  What a long way we've come, thanks to NERC, its many supporters, and other similar efforts across the country.  Even here in Virginia, in a County known for its conservative political focus (Think Tea Party, Mad Hatter style!), the benefits of recycling are recognized and supported (see photo).  I am thankful to have been a part of NERC's beginning, and have enjoyed watching both NERC and recycling grow and mature over the years. Congratulations to Lynn and her staff on expanding the organization and its continued role in environmental leadership activities and initiatives.

The more things change, the more they stay the same…

What’s changed about NERC in my 27 years in the business – nearly everything!  Because the industry has changed dramatically from nearly no industry at all to the wonders of modern technologies.

What has stayed the same?  The people!  Even when the cast of characters has changed the dedication, knowledge-sharing, the learning from one another has been consistently outstanding.

I started out my public sector career in our state’s environmental agency; particularly in the solid waste management realm.  NERC was the resource that broadened my perspective beyond my state into other regions, and other markets.  It provided me the opportunity to network on projects with the best of peers and demonstrated that industry and resource management can, and should work together to meet the challenges of sustainable source reduction and recycling.  I have since transitioned in to the economic development side of the equation, and the market based lessons arising from NERC’s mission are every bit as relevant for me now as they were in my environmental role.

I would like to thank the dedicated staff and board members who have been true to the mission and passions.  I would also like to recognize the great friends I made, and the enjoyable times that I had.  NERC has changed me for the better.

I was first impressed by NERC’s innovation and leadership with the launch of EPPnet, a NERC listserv that connected the burgeoning community of Environmentally Preferable Purchasing agents in the late 1990s.  The resulting conversations dug deep into the intricacies of product performance, technical specification, cost/benefit analysis, and the art of writing contract language.  Like explorers hacking through the underbrush, we confronted the ever-present threat of green washing and wrestled with the vagaries of LCA tradeoffs.  The journey was made all the easier and more satisfying because EPPnet helped us work together.  Looking back, I believe that those initial conversations and deliberations set the stage for a more mature and less simplistic approach to sustainability.  Thank you NERC!

When USEPA Deputy Administrator Dr. Hernandez speaking at a major meeting in New York City in the 1980’s declared that it was the new national policy to recycle 25 % of the Municipal Solid Waste (MSW), there was much commotion. There was much discussion about the national goal – why 25 % - how did he arrive at 25 % goal etc.  The North Eastern states, already facing USEPA directives to close open dumps, were trying to figure out how MSW could be effectively managed.  Mutual interest in finding technology options, cost effective recycling programs and markets for recyclable materials resulted in informal meetings of state officials. After a couple of informal sessions, the need for creating the North East Recycling Council (NERC) emerged. Those early meetings were lively and contentious and allowed the state representatives to explore options. Funding the NERC was also an issue and eventually each state agreed to contribute some funds. NERC is a good and worthwhile example of interstate cooperation to resolve waste management and recycling issues facing all the states.

It will be interesting to see what the new leadership in the Foggy Bottom will do to disrupt well organized MSW management systems.

Over the past thirty years, The Northeast Recycling Council has provided the forum for pro-actively sharing innovative ideas and affirming successful approaches to help our society reuse and recycle the "value" in materials after their initial use.  NERC's Team creates an environment that welcomes all parties involved in this very important effort. We who are involved in this "material management community" are thankful for the leadership NERC has provided and look forward to the future with much hope given the "worthy foundation" that is in place upon which to build" new long-term, successful initiatives.

NERC is unique organization.  It is regionally focused but has a national impact.  Its members are public sector recyclers and policy makers but it welcomes the input and participation of their private sector counterparts.  It avoids the “us versus them” mentality that can stalemate meaningful discussions on moving recycling forward.  Its two yearly meetings always include top notch speakers and sessions.  Congratulations to Lynn, Mary Anne, Athena, and Robert on 30 years of accomplishments.  Let’s go for another great 30 years!

Lynn and her team at NERC do a great job at creating a warm and open environment at NERC.  I enjoy NERC’s networking events where people are genuine and conversations are often more personal in nature than about business.  I think it’s important that we get to know each other as individuals before we discuss the issues as it seems to help build trust in one another and make those business discussions more productive.  NERC is a great place for those building blocks.

It’s an obvious testament to NERC’s effectiveness and value that after 30 years it’s still around and still teaching us how to be better stewards of our environment while capturing the dollar benefits that come with sustainable operations. I have never felt prouder to be part of an organization than the years I served as a Board Member and Officer of this productive, helpful and hard-working organization. Kudos on your 30th anniversary, and I look forward to seeing what’s to come.

Victor Bell, Past President & a Founding Board Member

Congratulations on 30 years of great achievements and persistence!

You have accomplished a lot, but still have much work to be done. Being around in the beginning when we were just starting to think about recycling, there was much excitement and cooperation leading up to programs from requiring newspapers to have recycled content to leading the way to reduce toxics in packaging. Today many of the challenges are the same, but the role of the States and regional organizations like NERC is critical.  Good luck on your next 30 years!

Progressive recycling policy often comes from one of two places in the United States: California or the northeastern states.  One cannot overestimate the critical and ongoing role that NERC has played over the past 30 years in shaping such policies.  NERC's leadership, accessibility and constant strive to improve and further recycling is second to none.  Congratulations to the NERC team and here's to another 30 years!

More quotes can be found in the February and March 2017 Email Bulletins.

For a small non-profit organization, NERC can boast an amazing series of accomplishments over the past 30 years.  Focused on supporting sustainable materials management through source reduction, recycling, composting, environmentally preferable purchasing, and recycling market development, NERC has demonstrated leadership with its projects and has broken new ground in a number of important areas.

During its tenure, NERC has implemented more than 100 projects funded by grants, dues, and contracts.  Staff has participated as stakeholders in national and international dialogues, and NERC has produced hundreds of publications and resources.  And all of this with a staff of never more than five people, and at times as few as three!

NERC’s Board of Directors provides strategic guidance and leadership for the organization.  In 2014 the bylaws were amended to expand the Board to include Ex Officio members in addition to the state representatives.

NERC’s staff are responsible for all program implementation, fundraising activities, and administration.

Advisory Members are an essential component of NERC’s success and ability to engage with all aspects of the sustainable materials management community.  Advisory Membership was launched in 2000.  Currently there are more than 70 members, and many of them have been members for 5 or more years.

In addition to NERC state members, several organizations have been particularly significant contributors to NERC.

Over its history NERC has substantively engaged in an impressive array of initiatives.  And, several of these were the “first” national efforts, leading the way for other organizations and programs to engage in the topics.  These include electronics recycling, unwanted medication management, recycling businesses investment forums, documenting the relationship of jobs to recycling, industry-wide voluntary producer responsibility initiatives for newsprint and direct marketing.

In recent years, NERC has been particularly active in source reduction/reuse, organics, electronics recycling, and environmentally preferable purchasing, among others.

Funding: from US EPA New England and Region 2.

NERC holds two conferences or workshops each year. Past agendas and presentations are available on the website.

Webinars are frequently offered and are usually associated with projects.  Recent examples include:

NERC’s Web site is a powerful resource, providing links to dozens of NERC publications, practical tools, and state level resources and information.  It includes a list of topic areas and resources on:

Amazingly, this is just a sample of what this remarkable organization has contributed to the recycling markets field in the past 30 years.  I’m honored to have been NERC’s Executive Director for the past eight years, working with remarkable staff and supported by dedicated Board members.  I extend my heartfelt thanks to them. 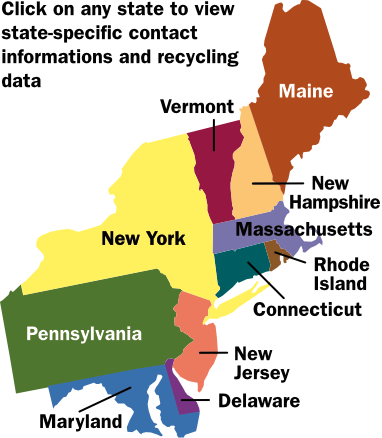